Those who still think the plummeting price of oil is a good thing for the economy are taken in by PR spin or the simple lack of coverage in the mainstream media. It is not about consumers having lower petrol prices and more in their pocket. It’s not even about the energy. It’s about the money, the financial structure of the oil industry, particularly for the wildly speculative ventures like shale oil extraction. Environmentalists will see low oil prices as bad news for climate change but they need also to look at the way these energy shale firms are financed and learn about things they don’t want to know about, like junk bonds, leveraged loans and derivatives. It causes more immediate pain and must be survived first. 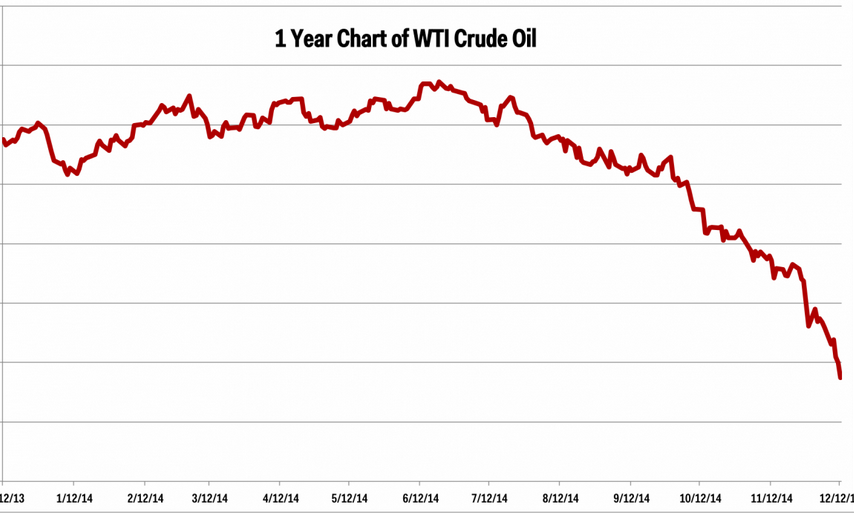 The relentless slide continues. As of Monday 15 December in New Zealand the price of WTI oil was $56.73, down over 47% since June this year.

Unfortunately in New Zealand we are being shielded from all this bad news. Bubble finance is not a sexy topic for a front page. During the last week the Dominion Post, national radio, Sunday Star Times had nothing, and a business programme on Radio Live on Sunday touched on everything but the junk energy bond issue or the derivative issue. The programme gave the impression the only place to invest was in shares, bonds or fixed interest. When the derivatives market is so enormous, this is a major omission. It’s not as though the media believe the public won’t be able to understand junk energy bonds or derivatives. The corporate owned media only gives us bad news when it is about crime.

OK let’s try and explain it.

There are four major risks of plummeting oil prices. The first is the risk to junk energy bonds held by pension funds, mutual funds and governments. Second is the secondary oil market, including the risk associated with a variety of oil derivatives contracts held by big banks. The third is the social unrest in oil exporting countries like Venezuela, Russia. And a fourth is the ongoing and contagious decline in prices of a range of other commodities – iron ore, copper, milk powder. Let’s just deal with the first two, though the fourth one is dealt with in passing.

1. Junk energy bonds. What on earth are these, you might ask. They are the risky bonds that energy companies sell to help finance their operations. The bonds give you high returns but they are also high risk as they are unsecured loans. That risk-taking now comes home to roost. For a new venture now the bank will lend you less because the oil in the ground as their security is now worth less. In December 2014 the oil is worth only about half what it was six months ago. So you have to get more of your funding from junk bonds. You end up shelling out more in interest and what’s more you get less in revenue from the sale of your oil.

Michael Snyder says “The impact of lower oil prices has been felt directly by high yield energy bonds and since September they have posted a return of -11.2%. J P Morgan has warned that if oil prices stay at $60 a barrel for three years 40% of the junk bonds could be facing a default.”

Of course other companies finance themselves using junk bonds (as well as bank loans at a low interest rate and their own revenue stream). The energy sector accounts for over 17% of the high yield bond market (junk bonds) and when these are hammered apparently a stock market decline always follows. It’s not a small sector either. Analyst Wolf Richter says there are $210 billion of them.

So they have to sell more bonds. Unfortunately now fewer investors want to buy the risky bonds so that means the yields go up to make it more tempting for investors. As the debt markets dry up and profits fall due to cheaper oil, the funding gap widens.

Who loses from this? The investors. And those employed in the oil industry as smaller or more indebted firms are less viable than others. And that is just the start.

But it isn’t only junk energy bonds being affected now. As the Financial Times told us on December 12,
“Investors are fleeing the US junk debt market as a selloff that started in low-rated energy bonds last month has now spread to the broad corporate debt market amid fears of a spike in default rates.” Woops, that wasn’t meant to happen.

2 Oil derivatives. Like other industries over the last few decades of financial wizardry, the oil industry has been financialised.

Remember when housing debt was bundled up by the banks, securitised, divided into tranches according to risk, and sold off? It was to increase the profits of the banks. You just pass the risk on. The bonds are sold to unwary buyers who don’t realise the risk for massive losses. The whole process was enabled by rating agencies who rated junk bonds (the risky ones have high returns) as A++. A great movie explaining all this was The Inside Job.

The 6 largest ‘too big to fail’ banks control $3.9 trillion in commodity derivatives contracts. A large portion of this is in energy. And the big banks of the world are on the other end of derivative contracts.

There is nowhere to hide. As the entire global economy is dependent on the six biggest banks, we will all be affected, even in New Zealand.

The Oil Industry is not just any old industry
Writing on Zero Hedge in October when oil was $75/barrel, Michael Snyder explains the huge investment of the energy industry in both capital expenditure and R&D.

He quotes the Perryman group on the economic effects of the oil industry in US alone:
If you think about the role of oil in your life, it is not only the primary source of many of our fuels, but is also critical to our lubricants, chemicals, synthetic fibers, pharmaceuticals, plastics, and many other items we come into contact with every day. The industry supports almost 1.3 million jobs in manufacturing alone and is responsible for almost $1.2 trillion in annual gross domestic product. If you think about the law, accounting, and engineering firms that serve the industry, the pipe, drilling equipment, and other manufactured goods that it requires, and the large payrolls and their effects on consumer spending, you will begin to get a picture of the enormity of the industry.

The combination of junk bonds and financialisation
Putting these two first effects together, former Reagan budget chief David Stockman, in an analysis on his “ContraCorner” website Dec. 9, wrote: “The now-shaking high-yield debt bubble in energy is $500 billion — $300 billion in leveraged loans and $200 billion in junk bonds. This is the same estimate EIR has made in recent briefings, of one-quarter of the $2 trillion high-yield market being junk energy debt. In that junk energy debt market, interest rates have suddenly leaped, in the past 45 days, from about 4% higher than “investment grade” bonds, to 10% higher; that is, credit in that sector has disappeared, triggering the start of defaults of the highly leveraged shale companies and their big-oil sponsors.”

“In the larger, $2 trillion high-yield debt market as a whole, interest rates have also risen sharply, so far by 2-2.5%: i.e., contagion. Whether the debt collapse will be “mini”, or maximum, may be determined in the markets for $20 trillion in commodity derivatives exposure.

“So now we come to the current screaming evidence of bubble finance—–the fact that upwards of $500 billion of junk bonds ($200B) and leveraged loans ($300 B) have surged into the US energy sector over the past decades—–and much of it into the shale oil and gas patch.

“An honest free market would have never delivered up even $50 billion wildly speculative ventures like shale oil extraction million of leveraged capital—let alone $500 billion— at less than 400bps over risk-free treasuries to.”

The simple fact is low oil prices kill millions of jobs. Falling oil prices are dangerous. While readers of mainstream media, listeners to radio and watchers of television remain in blissful ignorance of the nightmares that fund managers are living through, they will celebrate Christmas as though nothing had happened – and then ask later why nobody warned them.

The first Global Financial Crisis came on us with little apparent warning. The Queen was famously known to ask “ Why did nobody see this coming?”

For the last five years since QE, energy companies have received super cheap financing. Quantitative easing, where the Fed created trillions of dollars for banks, was a gift to the capital-intensive energy industry. Moreover job creation has been huge. Bloomberg reports Employment in support services for oil and gas operations has surged 70 percent since the U.S. expansion began in June 2009, while oil and gas extraction payrolls have climbed 34 percent.

It doesn’t matter whether the trigger for this fall was OPEC punishing the shale industry, falling demand in China, the end of QE or what it was. It was going to happen anyway and the trigger might have been anything. The whole pack of cards simply has to tumble. It’s a cauldron of death brought to the boil.

But many have seen it coming – Nicole Foss and Raul Ilargi Meijer of The Automatic Earth, Michael Snyder, Gail Tverberg, Jesse Colombo, Wolf Richter, Yves Smith are a few names that spring to mind. It’s just that haven’t been listened to yet. Whether is it the Tulip Bubble, the South Sea Bubble or the housing bubble of 2007, bubbles have a nasty habit of bursting.