A capital gains tax is not a solution as it complicated. A weak version will not have much effect and is expensive to run. An effective capital gains tax only freezes up property. Owners who are faced with giving all their capital gains to the public through taxes will simply not sell. They will just work for a change in government.

One possible solution is the land levy imposed at local authority level when a council owned bank issues rates vouchers to pay for the price of the land. This is more fully explained here. There will be other possible solutions. Any levy must be brought in simultaneously with a Citizens Dividend and a dramatic drop in income tax, preferably to zero. In this way we untax labour and tax land. It results in a more productive use of land and a rise in purchasing power as wages rise and prices drop. This can only be good for our prospects for investing in productive enterprises.

The discussion below assumes a traditional imposition of land tax, which we certainly don’t recommend. It outlines the rationale, facts, opinions as a background for the traditional land value tax.

You are invited to offer your solutions and participate in this important conversation. The headline in the Dominion Post on 22 May 2012 is “Investors return to property” and there will be more as the property bubble isn’t entirely over yet, certainly not in Auckland or Queenstown.

The resource tax that is most often recommended is a land value tax. It is a way of ensuring nobody profits from unearned income. The philosophy behind this is earthsharing. Land is not like other commodities, it is the very basis of life and it will be there when we die. Society should recapture the land values society has created. Land is part of the commons and society should receive a regular rental whenever a landowner has monopoly use of part of the commons. Things created by nature do not have the same right of private ownership as things produced by labour. For too long, landowners and speculators have been able to reap sizeable economic outputs from rising land values, though contributing little economic input.

This proposal is — leaving land in the private possession of individuals, with full freedom on their part to give, sell, or bequeath it — simply to levy on it a tax, irrespective of the improvements on it. This would be the main reliable source of Government revenue as we moved away from taxes taken from the earnings of labour. 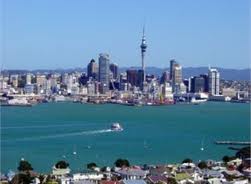 The most valuable land is in central cities

Local Body Rates The land value tax we are most familiar with is local body rates. When we pay rates based on the unimproved value of our land, that is a land value tax. Unfortunately over recent years councils have increasingly opted for rates based on the capital value of the property and for a Fixed Uniform Annual General Charge on services like water, sewage and community facilities. In some cases this fixed charge is 70% of the rates bill. Land or capital value are charged on the remaining 30%. So a different philosophy of user pays is now prevalent. And this policy results in people who occupy valuable land paying similar rates to those who live in more remote parts of the town just because they both have access to sewerage and water. It is regressive.

The argument for capital valuation is that rates are levied according to people’s ability to pay. But income is a poor predictor of someone’s ability to pay. Their wealth is a much better predictor, and much of their wealth is often tied up in property. According to Shane Jones[1] “The richest ten New Zealanders hold wealth equal to almost one third of the value of the stock exchange”. An examination of the asset holdings of these ten shows that most if not all have large land holdings.

Annual assessment of land alone is a simple and inexpensive process.

A national land tax to replace other taxes.

The traditionally offered solution by Georgists is that a Land Value Tax should replace other taxes like GST, income tax, company tax.  A central government tax could be added as an adjunct to the current system with little additional administrative cost. Taxing land would extend the central government tax base, and would also tax non New Zealanders.

If we tax buildings, there will be fewer buildings and also inferior buildings. But if we tax land, there will not be less land.  LVT improves housing stock and rental units since improvements, renovations, and additions do not incur increased taxation. 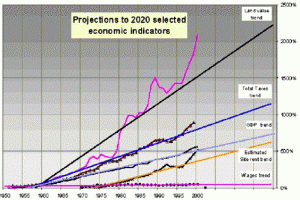 And here is a graph for NZ house prices for the last 20 years. We do not have the figures yet for the land value alone, which, if Australia is an example, will rise more steeply than the capital value.

Each property gains by the following by according to its location:-

The value of land near a block of shops, a park or good public transport is higher than land with no such public amenities. When the fast ferry started in Waiheke Island all land values increased. When in 2001 the rail was electrified as far as Waikanae land values remained constant while others went down.

The most valuable land in the country is in the centre of our largest cities where property owners gain benefit from the pedestrian traffic and centrality location. So any increase in the land value is not due to the work of the owner but due to other people’s work and other people’s decisions. It is the community who adds benefit to any property so it is the community who should benefit from any increase in value. We do not want to discourage work. If someone wants to upgrade their property and their capital value rises, then they should not be penalised.

Banks and property owners reap the rewards which rightfully belong to the public.

Land is part of our commons. Every time the value of the land rises and the property eventually gets sold for a higher price, the increase in land value becomes monetised. More money is required in the economy now. The land is turned into a commodity and the money supply has to grow. We need to take the mortgage money away from the banks and give it to governments, local and national.

Land value taxes would lower the price of houses, since there would be the burden of the taxes on the property.

Worldwide experience shows LVT has the effect of making land more affordable and the prices more stable over time, as Pittsburg has found. LVT reduces speculative land bubbles since more of the unearned increment that accrues to land is captured to finance city programmes instead of flowing to land owners.

Other parties advocate a capital gains tax, but this is only levied at the time of sale – maybe 5-15 years after a property is bought. A land tax would immediately raise revenue.

What would it raise?

In UK the total property value is 5 trillion pounds so a 1% tax would raise 50 billion pounds a year. The Scottish Greens are proposing a 3% tax (April 2011) and, because 69% of the land is owned by 0.3% of the population, under such a system 87% of households would pay less tax.

According to Andrew Coleman and Arthur Grimes, using 2006 figures, a 1% per annum tax on all non-government land could raise approximately $4.6 billion annually, about a fifth of income tax for 2009- 2010. (This means a 3% tax would produce $13.8 billion and a 6% tax would raise $27.6billion). They note that “Land taxes are known to be amongst the most efficient forms of taxation, as land is an immobile factor.” They muse whether agricultural land and forestry land should be exempt or incur a lower tax rate, but their calculation is on a 1% tax.

A land value tax is an essential accompaniment to the policy of interest free money. The latter would increase the demand for housing, raising prices, while the former, incurring regular payments of rentals, would keep land values realistically low. The exact level would have to be ascertained and a whole discussion entertained about exceptions (e.g deferring it till the death of an elderly ‘asset rich income poor’ owner), making policy on land with wetlands or native bush and on historic houses, countering objections and so on.

Farmers are big borrowers and banks are keen to lend to farms. It would not be uncommon for a $2m property to have a mortgage of $1 million. The farmers rely, all his life, on the property value going up enough so that when they retire they will have a nice sum for their retirement. That is a very healthy after-tax return of 7-8% a year, given there is no tax to pay. According to Andrew Gawith, director of Gareth Morgan Investments, the value of farmland has risen even faster (10.7 per cent a year) than housing over the past 20 years.

·    Land taxes can be imposed at both local authority and government level. However only central Government has the power to get rid of GST, income tax and company tax when land tax replaces them. Given the current situation, we need to work out a way for local authorities and national governments to share the benefits of land value taxes imposed at, say, 6%.

·    If a Land Value Tax at national level on all land is going to be imposed, then comprehensive research would be needed to find an optimum level, examine anomalies etc. For instance, one writer suggests there should be exemptions for farmland, national parks, charities and superannuitants’ main homes.

·   Land values must be put back in the CPI. All inflation figures are skewed if the main inflationery factor, rising land prices, is omitted.

One vital issue is that imposition of a 6% land tax is going to be enormously disruptive to the economy. It does not have widespread support because everyone hopes the value of their home will keep increasing (while they accept that other things depreciate. Everyone wants to get on this privileged escalator of home ownership and expect they will win, even though this actually means stealing from the rest of society at large. There is a mindset to change here) At the same time GST has to be abolished and income tax and company tax abolished, all an impossible political feat. So our party will be working out ways to introduce land tax and phase out other taxes in as pragmatic and sensible way possible. Paying money to banks instead of to government must stop! We are investigating suggestions how this could happen.

1 thought on “Putting a price on the holding of land”