Inflation is the enemy of the people. It serves nobody. When prices rise and things become less affordable it robs people of their income and their purchasing power. If they have saved for a big item, their money now buys less. 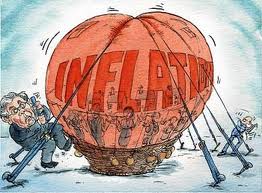 Inflation happens when the the money in the economy exceeds the need for it in trades. If new money is created it must quickly be used and put to work. Too much money chasing too few goods and services causes inflation. The largest contributor to inflation is rising house prices. Over the five year period February 2002 to February 2007 the housing bubble saw an unprecedented rise in house prices and this was mainly due to the rise in land prices not the house. During this period our money supply increased from $73 billion to nearly $118 billion or 63%. Land had been monetised or turned into a commodity and the money supply had risen just below 5 percent every year for five years. Once land has been monetised then the goods and services in the economy have to increase by 63% in five years to match it. If they don’t there is inflation.

We were certainly not 63% happier five years later but the money supply had gone up by that amount. It couldn’t all be accounted for by rising population or rising consumption per capita. Inflation had set in, but it wasn’t even showing in the CPI now, it was hidden. Houses became more and more expensive and further out the range of first home buyers. It took more and more of the average wage to buy a house.

In line with other countries which has adopted the doctrine of the Chicago School of Economics – Neoclassical Economics – land in 1999 was taken out of the consumer price index. In other words, land and capital instead of being two of the sides of a triangle (the other being labour) they were collapsed into one. Land was treated as just another commodity to be bought and sold and of course it was redefined as an investment at this stage. It was the beginning of the corruption of economics.

The huge inflation during the 1970s were due to a housing bubble. People bought and sold sections at profit, the money supply blew up and inflation set in. Because of inflation there was a lowering value of purchasing power and everyone lost out.

When banks push money onto people as they did during these periods, bad loans are made. The bank does nicely though. During the 2002-2007 people bought second homes, and leveraged their assets using the security of their first home. The banks were pushing second credit cards onto people who were high risk.