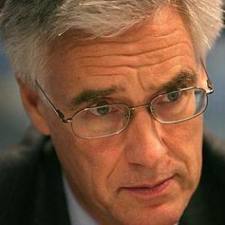 A breakthrough speech on Monetary policy by journalist and financial economist Anatole Kaletsky was published by Reuters on Feb 7, 2013.

Kaletsky explains that one of the most influential financial policy makers in the world, Adair Turner, chairman of Britain’s Financial Services Authority has drawn attention to the fact that the combination of zero interest rates and Quantitative Easing as it is currently practised are neither alleviating unemployment nor halting declining living standards. Giving money (about $85 billion a month) to the banks and Wall Street investors by buying government bonds isn’t working.

Adair instead suggests dividing up this money evenly among American citizens and distributing it every month to stimulate the economy. It would work out a $283 monthly for every man, woman and child in America. He says it would be infinitely more effective than distributing money to bond investors and banks through QE.

Lord Adair Turner’s Feb 6 speech Debt, Money and Mesphistophales: How do we get out of this mess? is not for the faint hearted. At 46 pages it is a challenge, and after a quick skip through, I will trust Kaletsky’s summary. The references include Minsky, Milton Friedman (he invented the term “helicopter money”, often attributed to Ben Bernanke) Henry Simons, and the authors of the The Chicago Plan Revisited, Jaromir Benes and Michael Kumhof. Professor Steve Keen from Australia has been recommending Quantitative Easing for the People for some time.

As Ellen Brown says, “The Federal Reserve has lavished over $13 trillion in computer-generated bail-out money on the banks, and still the economy is flagging and the debt ceiling refuses to go away. If this money had been pumped into the real economy instead of into the black hole of the private banking system, we might have a thriving economy today.”